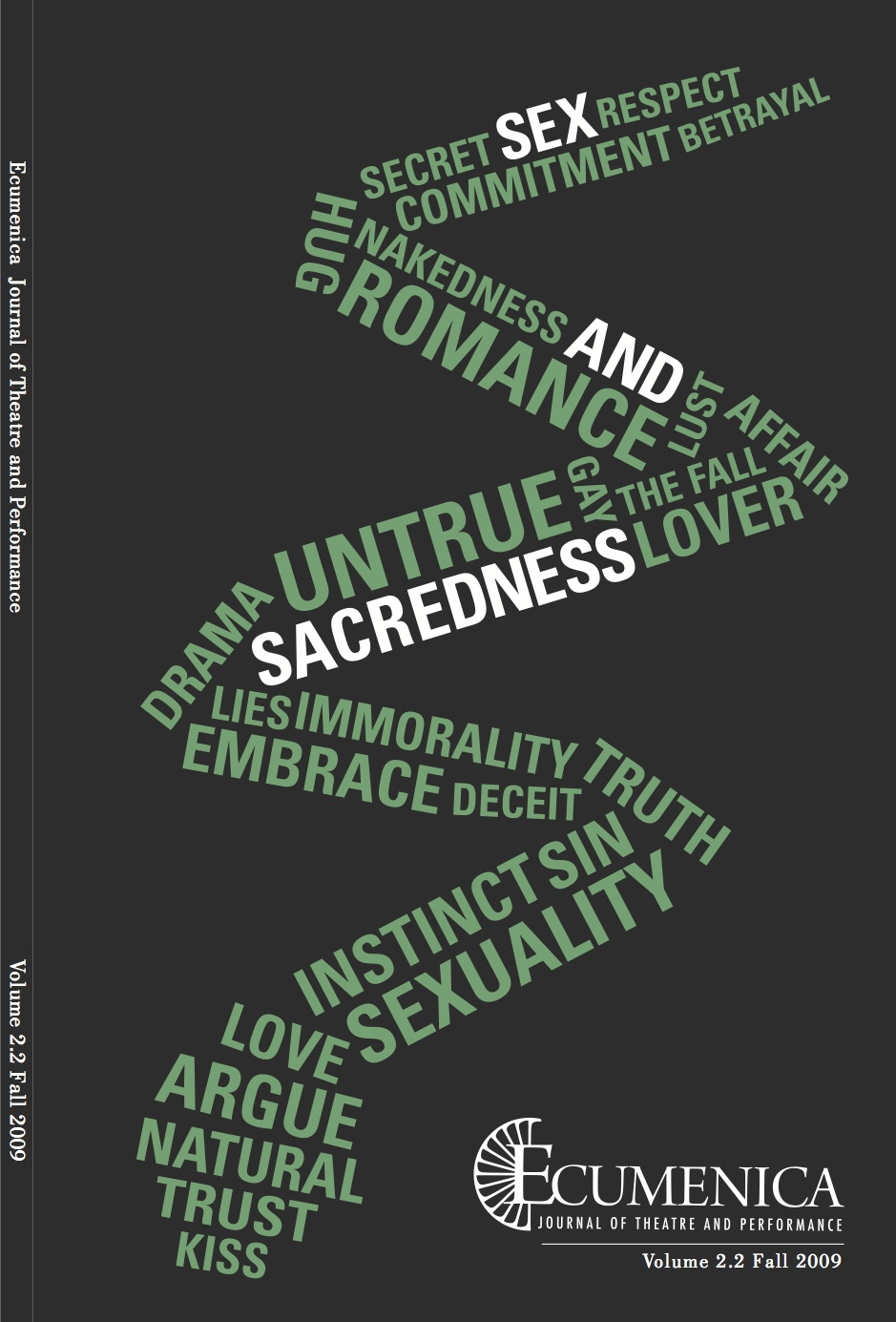 At its earliest inception, this issue was going to be dedicated to examining queer approaches to religion through performance. But then, on Valentine’s Day 2008, NPR aired a piece entitled “The Joy of Christian Sex Toys,” which highlighted the efforts of online retailer Book 22, purveyors of intimacy aids to married Christian couples. I admit I greeted the piece with discomfited amusement. I wasn’t alone…comments on the online discussion board for the story ranged from supportive to disgusted to disdainfully amused—“You pray over those things before you put them in your catalogue? Really?”

On sober reflection, I repented my own inability to deal fairly with Book 22’s proprietors or their project, and began to think more deeply on the implications of the story and the responses it generated. I now find their intention rather brave, in its own way, as there are so many injunctions against direct reference to the erotic dimensions of life for many religious devotees. It was a catch-22 that spawned Book 22, after all. For the founders, a married couple, opened the business as a response to the complications of maintaining intimacy in their relationship within the confines of their closely-held convictions. The solution that they found has a fascinating theatricality, as does the public response to their website.

While a number of traditions acknowledge that sex is a serious topic of conversation, especially in regard to the maintenance of core beliefs, open discussion about sex and sacredness is not easy in our time. While artists from Rumi to Prince might wax rhapsodic about the spiritual quality of eros, try having a conversation with your priest, your mom, or your lover about “doing it” and the Divine. Gets a bit more awkward, yes? The discomfort surrounding the subject has serious implications, really. V-Day International, the organization that uses Eve Ensler’s The Vagina Monologues to work toward an end of violence against women and girls, often emphasizes that women’s silence about their bodies increases their vulnerability to attack. If someone can’t even say the word “vagina,” how can she articulate experiences of either abuse or pleasure?

Both Book 22 and V-Day speak to a need to speak out that goes beyond any one cultural moment or belief system. I realized, after the NPR broadcast, that this volume, when it came to fruition, needed to take a much broader approach; instead of focusing solely on LBGT issues (though they would certainly still form a part), the journal would look for everything we could find on the topic of Sex and Sacredness. Every human has a body, experiences desire, learns cultural expectations of gender, wrestles with the procreative (and recreative) norms of their time and place. So what makes sex so damned hard to talk about for saints and sinners alike?

I asked John Fletcher, whose writing at the intersection of religion and theatre manages to be simultaneously astute and effervescent, to join Ecumenica to take up the topic. I can think of no one better suited to the task; he is a scholar who tackles sexuality and faith in a way that is equal parts exacting and joyous. This issue needs both; it exists to confront awkward topics, to give serious and rigorous consideration to sexuality as a part of many big spiritual questions. Sex is part of sacred practice in some traditions; in others it, it is evidence of our fallen nature. Any way you view it, there are a number of performative elements designed to express it, to contextualize it, to regulate it. There’s theatre that reflects it. We agreed to frame the discussion in such a way that frank conversation about the relationship of sex to sacredness could take multiple directions: how do different faiths perform and construct sexuality? What is the relationship of the body and its creative/recreative function to the soul, and how do ritual and entertainment depict that relationship?

The resulting volume brings together artistic and scholarly projects from a broad array of perspectives and topics. They study gender roles, sexuality, self-control, sin, and everything in between. Let me be clear: this volume of Ecumenica seeks a different sort of satisfaction than the kind advertised by Book 22 or the Kama Sutra. We prefer to expose our readers to the pleasures of good scholarship. We hope this issue offers work that is meaningful, fair, thoughtful, and playful, too. It is, after all, intended to be the beginning of a long-overdue conversation.