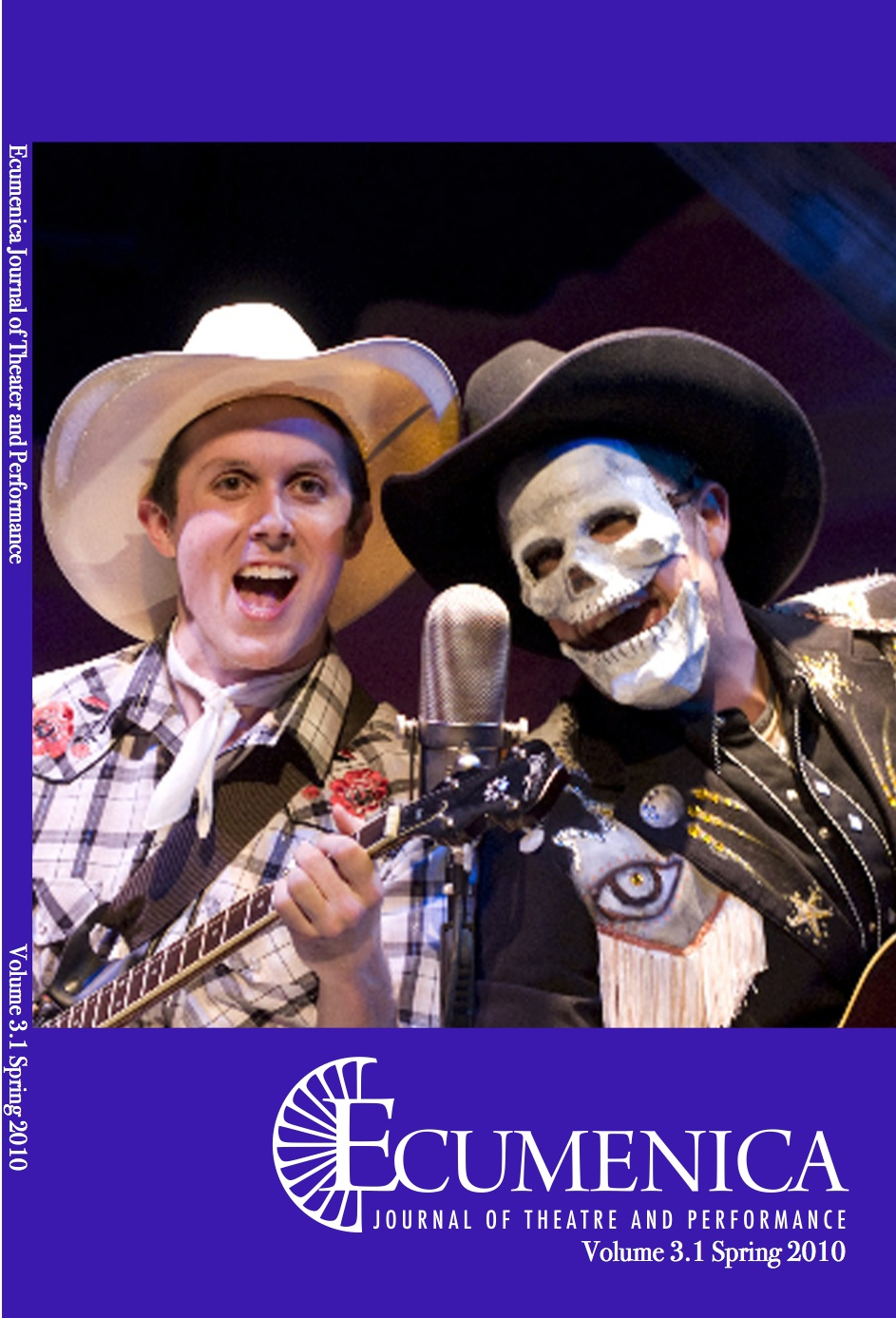 This volume was never slated to be a special issue, and officially it is not. Yet the felicitous commonalities between contributions suggest it might be. Both features address contemporary interventions into ancient performance. Miriam Kammer’s feature titled “Romanization, Rebellion, and the Theatre of Ancient Palestine” uses recent archaeological finds to consider the possible political and social import of Roman amphitheatres in a contested landscape. The essay dovetails nicely with Thomas Donnarumma’s interview with Yisrael Campbell, which makes a present-day visit to the region, as seen through the eyes of an American convert to Judaism who now lives in Israel. Kammer’s analysis considers the role of performance architecture in the encounters between native people and an occupying force; Campbell’s one man show, and this conversation, reflect a personal quest for spiritual and artistic fulfillment—two very different approaches, separated by centuries, grounded in the same space.

Robert Brophy, in the feature “Andromeda and the Beauty of the African Soul: Greek Tragedy and the Early Christian Fathers,” works to reclaim the protagonists of several golden age plays as black Africans and to

counter the moral implications of blackness versus whiteness in the modern production history of such plays. Tom Robson’s profile on The Rockae chronicles a contemporary rock music production of The Bacchae. Both essays demonstrate a preoccupation with reclaiming the vitality of ancient works, and the possibilities of innovative dramaturgy and performance techniques for creating connections to contemporary audiences while remaining faithful to the source material’s essential nature.

The rest of this issue’s content addresses a variety of subjects germane to our readership’s interests. Cynthia M. SoRelle’s profile on the organization Literary Managers and Dramaturgs of the Americas (LMDA) is both a history of the organization and a précis of the ways that LMDA practitioners further spiritual inquiry in creative and scholarly work. Our reviews section evaluates texts from multiple disciplines that have connections to religion and performance, as well as four notable contemporary productions. Those featured in this issue: Equivocation, All the Fame of Lofty Deeds, Let Me Down Easy, and The Madonna Painter may be of particular interest to theatre departments looking for something fresh for their next season.

Before I close the introduction to this volume, let me direct your attention to the announcement on the facing page. Ecumenica is finalizing our process of reorganization, and we are now an independent non-profit. As we have evolved, the staff of this journal has conducted an ongoing conversation on the proper role of the publication in our field. We stand on the cusp of a major shift in Publishing. Transformations, brought on largely by the influences of electronic media and financial crisis, are underway. The very definitions of what it means to be a reader and what constitutes a book or article are in flux. If a recent mid-year meeting I attended is an indication, academics are spooked. And we should be; our institutions have not yet taken the steps they need to prepare for the next iteration of “The Text.” But, ultimately, I believe that we confront a moment of extraordinary possibility. I already have a Kindle (and you’ll have to pull it from my cold, dead fingers), and I long to get my hands on an IPad. More and more of the articles I read come to me in .pdf form. I still love the solid spine and papery smell of a new book, but I also enjoy the delightful convenience of e-manuscripts. We would like for Ecumenica and its readership to embrace the promise of emerging forms of electronic scholarship. So, we have launched a series of new initiatives: a podcast series housed on our website, a Facebook Fan page that works as a news aggregator for religion and theatre. Our website has been undergoing a gradual remodel; the next step is a revised and resources section that will connect visitors to sources of information, funding, and networking. We have begun discussing how we may innovate, creating space for new scholarship uniquely suited to electronic media; we would like to hear from you if you have ideas in this area. We hope to create new content that will compliment our current offerings. Ecumenica still intends to generate two print volumes a year…although I would LOVE to have a version for that sexy new IPad, too. Or an Ecumenica app for my IPhone. Is there a programmer in the house?