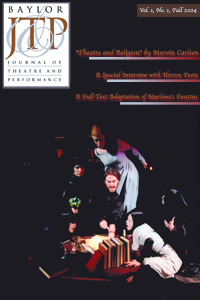 Abstract: Viewing theatre and religion as a couple involved in one of the world’s most lasting relationships serves to remind us not only of the depth and richness of this relationship but also its history of complex negotiations as the two partners have had to continually reformulate and reexamine the operations of the relationship as both have changed in the passage of time. The border between theatre and religion has at times been so porous that the two were almost indistinguishable, and at other times it has been so rigidly defined and patrolled that the two were considered almost polar opposites. Religious drama is still as popular and often, controversial, as it ever was with such modern works as Andrew Lloyd Weber’s Joseph and the Amazing Technicolor Dreamcoat, and Tony Kushner’s Angels in America. The world’s oldest couple have not lost any of their interest in each other over the centuries, and changing social and cultural conditions have attenuated their relationship, but continued to enrich and open it to ever new perspectives, as true of any relationship of any seriousness and duration.

Feature: The Playwright and the Prophets: Thomas D’Urfey’s The Modern Prophets (1709)
Larry Dooley

Abstract: Although nearly forgotten today, Thomas D’Urfey wrote thirty-three plays and was a favorite of King and court both before and after the Revolution of 1688. He was a musician and singer of some notoriety, and although he fell on hard economic times near the end of his life, he made a living in the theatre for nearly fifty years. It was an unfortunate lack of timing, however, that Thomas D’Urfey brought his satire The Modern Prophets: Or, New Wit for a Husband, to the Drury Lane Theatre in May, 1709, almost an entire year after the religious enthusiasts he hoped to depict had faded from public attention. The lack of contemporary reaction to the play is interesting since the comedy is a brazen and extended satire on religious practice. While individual characters representing Nonconformist positions were sometimes treated as the butts of humor in plays of the time, religious practice rarely took a central position in early eighteenth-century English comic drama. Although D’Urfey often sacrificed artistic merit for expediency, there were also times when his convictions seem to have gotten the better of him. In the end, D’Urfey may have simply misread public interest in Enthusiasm and strayed from the tastes of the town, but it was also possible that he was earnestly attempting what he labeled as “novelty.”
Feature: A Meeting of Peace and Piety: Civic Celebrations for a Royal Entry in Seventeenth-Century Silesia
Dale Allen Scott
Abstract: On 18 September 1611, Matthias II, the Habsburg King of Bohemia, entered the city of Breslau to receive the homage of the Silesian estates. The visit was politically and religiously critical for the region, coming just four months after Matthias deposed his brother Rudolf as Holy Roman Emperor, and four months before Rudolf’s death and Matthias’s accession to the imperial throne. Matthias’s appearance was celebrated in grand style, with pageantry and polychoral music performed by city, church, and school musicians. The focal point of the reception was a triumphal arch in the center of the city, which contained a gallery for choirs and instrumentalists. The most significant work performed at the arch was the polychoral motet “In te magna tuis spes est” by Samuel Besler, commissioned for the occasion by the Breslau city council. The text of this motet contains the image of a meeting of Peace and Piety, along with appeals for serenity for Matthias’s kingdoms. This article is an examination of the celebrations based on contemporary accounts. The city’s reception of Matthias represents a nexus of Silesia’s political, civic, and ecclesiastical realms in paying homage to their Habsburg overlord. More importantly, however, the underlying message of the celebrations was an appeal by the estates to the Catholic Matthias to preserve Protestant rights under the 1609 Letter of Majesty issued by Emperor Rudolf, thus demonstrating how music and civic celebrations operated as both overt and subtle means of propaganda in a time of political and religious upheaval.

Abstract: This essay investigates the ideological contestation between orthodox Christianity and material feminism regarding contemporary readings of Hrosvit’s Dulcitius. Specifically, the article examines the role of torture and flight within this medieval drama as either a critique of patriarchy or exhibition of martyrdom, with special attention paid to each claim’s relationship to Antonio Gramsci’s notion of hegemonic power. Additional analysis concerns the precise function of torture (as defined by Elaine Scarry) within the drama from both orthodox Christian and material feminist perspectives.

Highlight: “The Sacred Precinct: Reclaiming the Place of the Christian Humanist Tradition of Theatre Art in the 21st Century intellectual community”
Lloyd Arnett

Abstract: This paper addresses two concepts, A One-Theatre World and The Sacred Precinct, which he deems essential to understanding theatre in culture and its place in the university. Arnett sees the theatre as a unique artistic function of society, a divine endowment, and a place to explore great topics of human import. As a result, theatre becomes an absolutely essential and vital function of the academic and intellectual community. That the so-called “Christian theatre” of our time is often removed from the world and is a closet drama affirming the converted. This speech posits that the one legitimizing question theatre artists can apply to their work is: Can anyone coming in off the street benefit from my art? Or am I doing self-affirming work for insiders? This argument suggests a Sacred Precinct as the place where audiences observe whatever conventions theatre establishes for the presentation of stories. The university is such a place where a community speaks out loud, telling the human story. The body of the literature of the one-theatre world, produced in the sacred precinct worldwide, is a constantly repeated reflection of the human agenda for every generation.