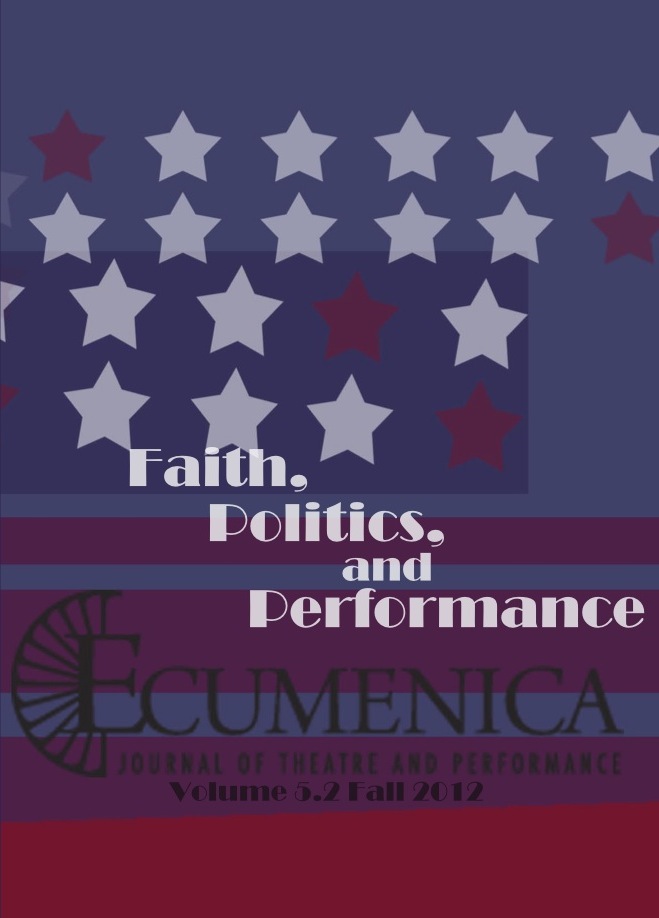 The events of the current US election cycle leave me feeling almost as if it is unnecessary to write an introduction to this volume. The parties and candidates have already done plenty to demonstrate that politics is theatre. There is a true sense of watching a high stakes drama unfold, with high tech staging and the best production elements that Super PAC money can buy. We have seen comedy (got binders full of women?), mounting tension (just check the posts on your favorite social media platform), and plenty of melodrama (insert political ad here). Joe Biden and Paul Ryan’s debate had an almost vaudevillian quality. And while both candidates have been relatively quiet about the subject, religious rhetoric has peppered the dialogue surrounding them.

Growing up in the old, mainline Baptist tradition, I was taught to value a strict separation of church and state. The elderly deacons liked to say, “Mix religion and politics, and what do you get? Politics.” I think many of the stakeholders in modern nation-building—and not only in the US—would echo those sentiments. Of course, they may be looking at it from the other side of the equation. My Sunday school teachers were suspicious of any perceived efforts by the state to intervene in the church’s autonomy. Unlike the participants of recent uprisings, they were not wondering (in hope or fear) whether their revolution would birth a theocracy.

Peter Civetta, our guest editor, is a long-time observer of the interplay between religion and politics; his research attests to the performative qualities of both, and to the deep-seated emotional and psychological drives that underpin the choices we make in both areas. When we set out to devise this volume, we agreed that there could be no more opportune moment for such a project. Our common goal was to encourage rich, nuanced scholarship on the topic. The final product demonstrates the variety of approaches that are possible: current and historiographic, insider and outsider, from preacher, performer, playwright, and professor.

Our features concentrate on American topics: Claire Maria Chambers considers the US military’s encounter with Islam and unpacks imperatives of secularism in “‘Holier than Thou’: Religion as Teaching Tool in the Rhetoric of Secularism, and the Case of Osama bin Laden’s Burial at Sea.” Tamara Smith explores the efforts of a nineteenth- century politician and playwright to establish the fitness of Jewish Americans for participatory citizenship in “Fully Jewish and Fully American: Mordecai Manuel Noah and Edmund Kean’s Sympathetic Shylock.” In “‘The Cross is My Statue of Liberty:’ Performing Christian Nationalism at the 2011 National Quartet Convention,“ Vivia Kay Kieswetter examines the notion of convention space as ‘contracted performance space’ where Christian Nationalist narratives interweave political and religious allegiance. Guillermo Márquez-Sterling, a pastoral associate at a large, urban church, offers a performative reflection on the homiletical difficulties of tackling controversial topics.

This issue’s Highlights draw attention to the global stage. Julia Listengarten provides context for the uproar over the band Pussy Riot’s incursion into Moscow’s Cathedral of Christ the Savior, and their subsequent, very public trial. Kevin J. Wetmore, Jr. draws our notice to the advent of the 50th anniversary of Hochhuth’s Der Stellvertreter (The Deputy), a play that triggered a heated international debate on the Vatican’s potential culpability in Hitler’s implementation of the Final Solution. Kyle A. Thomas introduces a new translation of The Reformers, a play written by Croatian Nedjelko Fabrio in the wake of Yugoslavian unification, which draws parallels between that region in the wake of WWII and the state of the Protestant Reformation after the death of Luther. In addition to these, playwright Caridad Svich has generously shared with us a scene from her latest play, Spark, a family drama that chronicles the homecoming of a female American veteran returning home after service in the Middle East. Our book and performance reviews also represent the ideological, aesthetic, and theological variety of current drama and criticism in the field.

If I had the opportunity to meet with those deacons again (most of whom seemed to regard me with tolerant affection), I think I would suggest a corrective to their maxim. What do you get when you mix religion and politics? Performance. Full of spectacle, imminently watchable, sometimes exasperating, occasionally disheartening, but always dramatic, performance. Readers, your candidate may win this fall, or your candidate may lose. Whether the world falls apart after that is less a matter of that eventuality than of our attention and response to the performances you and I are seeing.