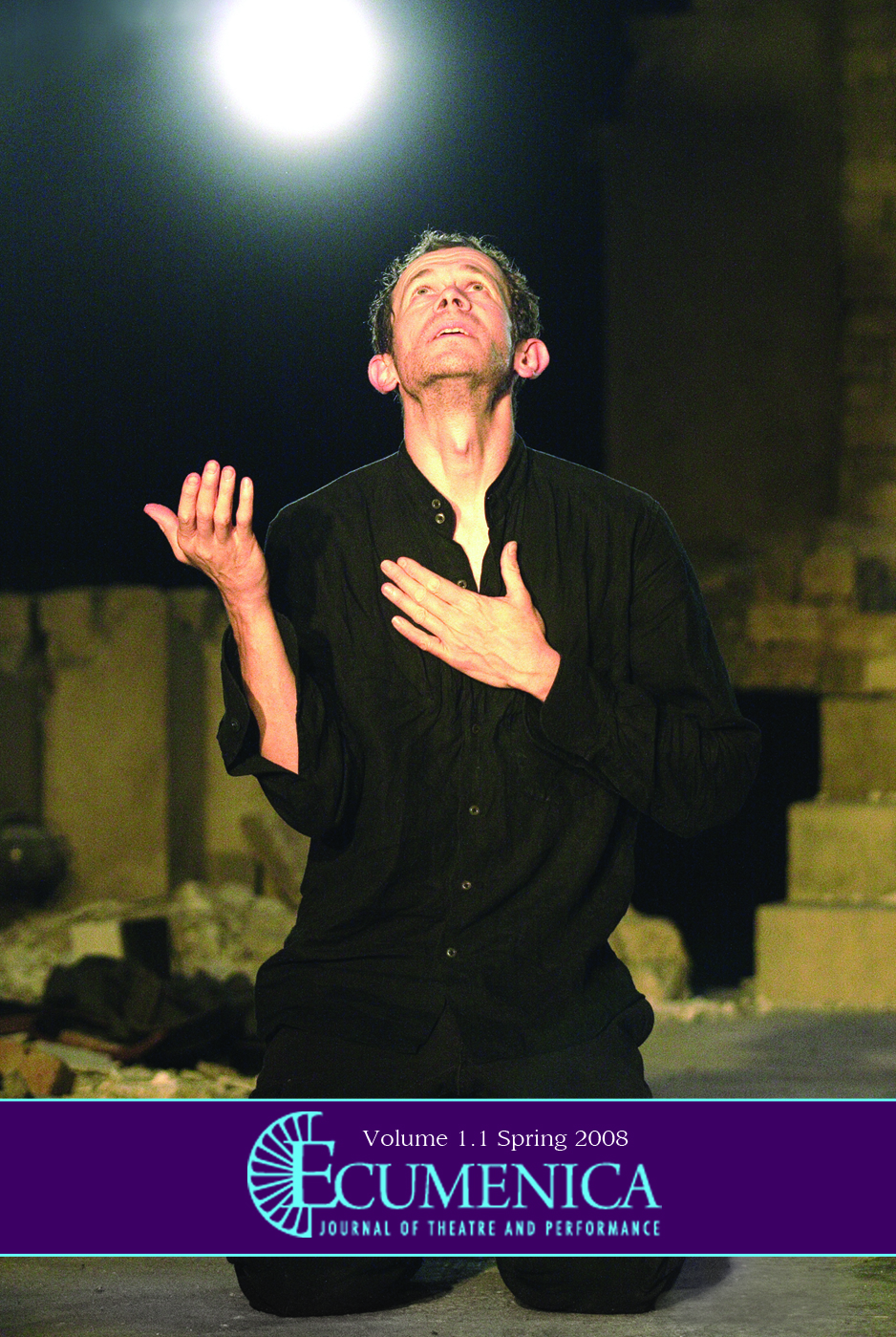 I begin with the obvious—I am certain that readers and puzzled librarians noticed upon picking up this volume that the masthead bears the name Ecumenica rather than the Baylor Journal of Theatre and Performance. As editor, let me assure you that our scholarly mission and commitments remain the same. The change of name, which has been in the works for about a year now, actually reflects that sense of constant purpose. This journal exists to foster serious, rigorous discussion about the nature of the relationship between faith and theatrical performance. It began with the idea that Christians needed to talk more seriously with one another, and with artists outside of their particular faith tradition, about the many ways in which belief and art engage in acts of co-creation. This is an intellectual conversation that must engage the whole scholarly community, if it is to be fruitful and meaningful. So, we have a new name that reflects this. “Ecumenical” refers to things that belong to both the whole body of the Christian church, and to the world at large. And so, Ecumenica stands as an invitation to the world of theatre and performance at large. It emerges from our own belief in a Creator and ourselves as creators, and enthusiastically embraces lively discussion on the ideas that form the core of our academic discipline. This is something we have always done, of course—publishing volumes on faith, violence, and performance; Indigenous performances in the Americas; the role of music and movement; and soon, Islam and the Muslim world. The name now reflects the vision and the invitation.

With that in mind, our two feature articles seek to grapple with theoretical problems that persist in interdisciplinary circles. James O’Regan’s “Taxonomy of Liturgy and Theatre: Structural Similitude” makes a close phenomenological comparison of Roman Catholic liturgy and theatre as events. Recalling last year’s ATHE Religion and Theatre pre-conference, where participants lamented the lack of a comprehensive body of materials for teaching religion and theatre (even despite the pioneering work of scholars like Richard Schechner and Victor Turner), this seems an ideal moment for such a study. “Masks, Trances, and the Imagination” by W. Keith Tims considers the existential implications of masked performance, both in belief communities and on the stage, in order to demonstrate that Sartre’s notion of bad faith can actually help produce good theatre.

Our Highlights section opens with an interview by John H. Baker, who discusses with actor Adam Godley his performance of the apostle Paul in Howard Brenton’s play of that name. A play about the quintessential Christian by an acknowledged atheist and provocateur requires thoughtful handling, which their conversation addresses. A second interview follows, this one between myself and Ron Marasco. An actor and director whose new book, Notes to An Actor: Practical Advice Shaped to the Way Actors Work, considers the actor’s soul as well as the nuts and bolts of giving a good performance, Marasco and I discuss spiritual disciplines attached to talent and technique. The section closes with the text of a speech by Stacey Connelly, originally presented at the 2008 Mid-America Theatre Conference. “Difficult and Dangerous Dialogues: Islamophobia, Interrogation, and Torture” relates the author’s experiences as a dramaturg and director trying to create a conversation on religion and politics in San Antonio, and offers a thoughtful reflection on the subtleties (and perhaps near impossibility) of creating a meaningful dialogue in the current U.S. climate. While the piece is not connected to our upcoming issue “Performing Islam/Muslim Realities,” I invite readers to view it as a precursor to that project and to anticipate our Fall issue.

The last section of this issue, our book and performance reviews, reflects the multiplicity of ways in which art, spirituality, and society are intertwined. There are endless possibilities for exploring the intersections between them, and in its new incarnation Ecumenica looks forward to that journey with our readership.